In the ongoing saga of Military Visualisations and the ATR72, they have revealed the true depths of their disdain for the community, their arrogance and their greed.

In a post on their Facebook page, they have revealed their intended price point for the ATR72 for both Prepar3D and for X-Plane 11 should it come about. 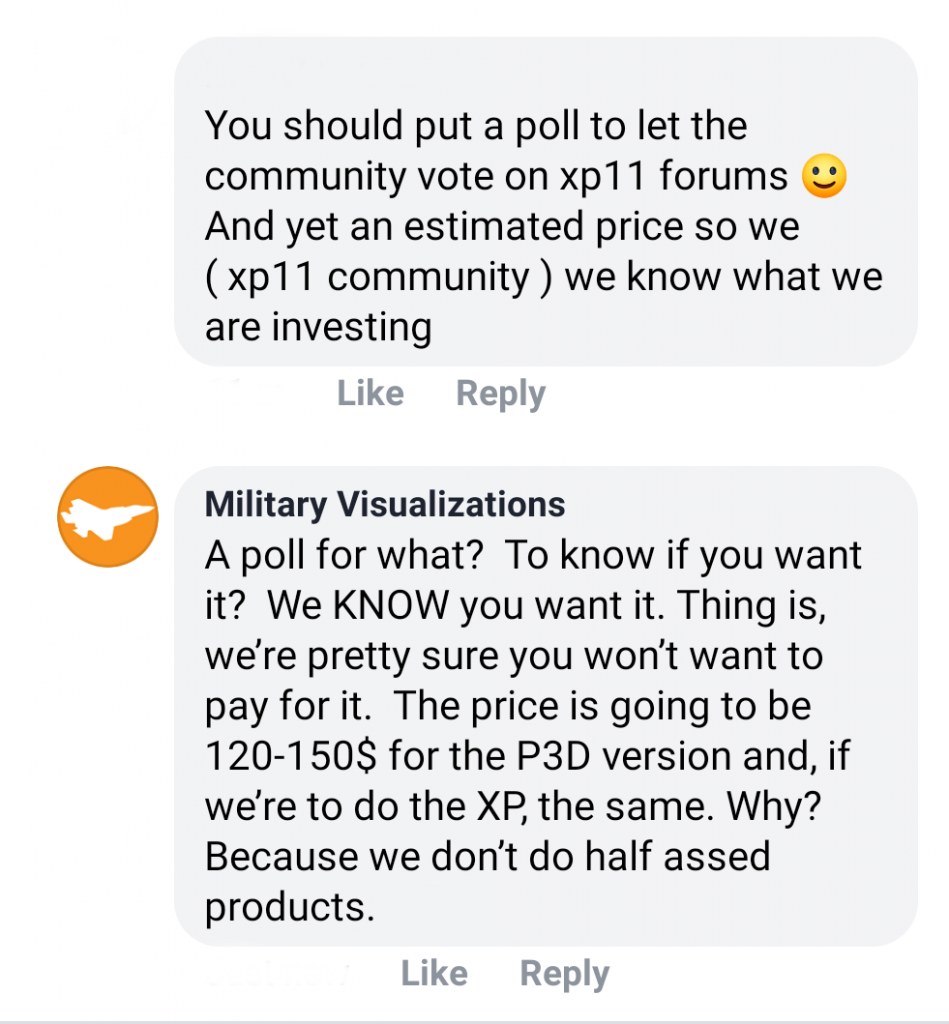 In this post they advise the intended price is between US$120 and US$150. WHAT THE ACTUAL F%$K?!?!?!?!? To put this in perspective, lets have a look at not only the real life competitor to the ATR72, but also its competitor in the ESP platforms; the Dash8-Q400. Majestic’s rendition of this turboprop regional airliner has been considered the benchmark and its update program and constant drive to improve proves its value. Majestic offer their product in 3 editions: Pilot, Pro and Training.

The Pilot edition is designed for the normal home simmer, still highly detailed and full of high fidelity aspects, yet still accessible to all simmers, whilst the Pro edition kicks the realism up through failure modelling and increased fidelity of the aircraft systems. The Training edition however is designed for and offered to REAL AIRLINES TO TRAIN REAL PILOTS! And the cost of that Training Edition? US$138. That’s right folks, software that is used to train real world pilots in proficiency and currency is cheaper than what MilViz are proposing to sell to us as an approximation of a real world aircraft for the home simmer to fly. That’s not recouping development costs, or selling a value proposition; that is pure, unadulterated greed.

Yet even beyond the criminal display of greed with that price point, there was the disdain and arrogance shown towards the community.

We KNOW you want it

Really MV? Is it what we want? What we really, really want? Ok, so if it is, then why is it you need to steal $20K from us in a Kickstarter to do your damn job? If its what we want then why not make money of the sales of your so called non-half-assed product?

I thought I had seen the lowest depths when I saw the Kickstarter launch. Yet today, I have seen a developer I once respected sink to depths I thought impossible to reach. MilViz is now nothing more than a greedy thief; a plague on our community.

The question now is, do we as a community let this happen? Do we let this now become the norm?

I am reminded of a phrase and feel it is particularly poignant,

The behaviour you walk past is the standard you accept.

Discord For All!
Ned Kelly’s Not Dead Yet