Guess Who Is Back In The Flight Sim Business?

In a move that caught EVERYONE by surprise, Microsoft announced the rebooting of their long dead franchise Microsoft Flight Simulator.

Details are still VERY sketchy, but the trailer is nothing short of jawdropping.

What we know so far:

This is very much a developing story and looks amazing. But will it die like Flight? Or is Microsoft here for the long haul once again?

There is no price point as yet, however it is being marketed as part of their Xbox Game Pass subscription service giving access to over 100 games on demand.

More information is expected over the coming days as E3 kicks off in the US, and on the official product page http://www.xbox.com/flightsimulator 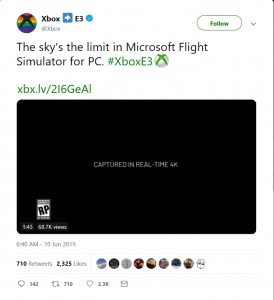 The timing is interesting, dropping just hours after Flight Sim Expo wrapped up in Orlando from its biggest event ever and just hours before E3 kicks off.

What an exciting time!

A Kiwi Glass Parrot
The Future Is Here!