Recently Iris Simulations rebooted their PC-21 product and released the 21-Driver. This update to their model adds in a slew of new features, most importantly full Prepar3D v4 compatibility.

It also added in a range of new colour schemes, as well as removing others. It would seem that developers now have to be more cautious than ever about liveries that are put into their products. With great interest I noticed that there were several new schemes that looked similar to the liveries being sported by the new RAAF PC-21’s, but with a variety of items changed such as roundels and squadron markings.

So I present three corrected colour schemes to update those liveries to reflect their real world counterparts. 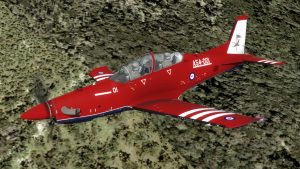 The first is in some ways an update an old livery I had created, the scheme of the first delivery aircraft, A54-001. This is as delivered in the colours of 2FTS and updated to reflect some changes to the model and more available details about the airframe. 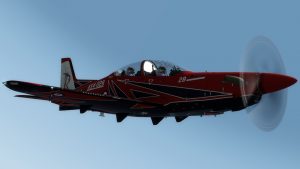 Next is the 1FTS / Roulettes display scheme. A modern striking design that caused consternation amongst enthusiasts following the radical departure from the smooth lines of the Roulettes scheme on the PC-9. 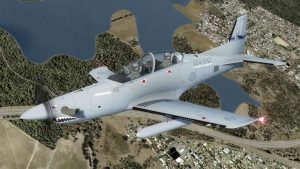 Finally is the rendition of 4 Squadron’s freshly delivered close air support tactical colour scheme. The PC-21, as well as serving the training needs of the RAAF, also provides Forward Air Controller and JTAC support for ground operations. Four aircraft will replace the four PC-9’s currently operating in this role as they are retired at the end of 2019.

These liveries are designed to coexist with the ones supplied by Iris, though you can replace the originals if you choose.